The Copa MX has undergone a bit of a makeover for the 2019-2020 season; most notably, there will only be one tournament, with the group stage taking place in the Apertura 2019 and the knockout rounds in the Clausura 2020, instead of running a full tournament in each season.

The group stage will begin on July 31, while the knockout rounds – which will now be two-legged, total-goals series – will start on January 21.

A total of 27 clubs will participate, 15 from Liga MX and 12 from Ascenso MX, and they were drawn into nine groups of three with the requirement that each group have at least one team from each league.

END_OF_DOCUMENT_TOKEN_TO_BE_REPLACED

The Clausura 2019 edition of the Copa MX will feature 14 from Liga MX and 13 from Ascenso MX, divided into nine groups of three.

The participants from Ascenso MX were determined based on Apertura results, while every Liga MX team not involved in the CONCACAF Champions League will be in the Copa MX.

The 27 participating teams were divided into three pools based on Apertura results, and were then drawn into groups, with the caveat that each group must have at least one team from both leagues in it.

END_OF_DOCUMENT_TOKEN_TO_BE_REPLACED

The draw has been held and the groups are known for the Apertura 2017 Copa MX . Seventeen Liga MX teams (all save the newly promoted Lobos BUAP) and 10 from Ascenso MX were drawn into nine groups of three for the cup competition.

The teams were divided into three pots for the draw, based on the teams’ cumulative records from the 2016-17 seasons. One team from each pot drawn into each group, with the caveat that each group must contain at least one team from Liga MX and one from Ascenso MX.

END_OF_DOCUMENT_TOKEN_TO_BE_REPLACED 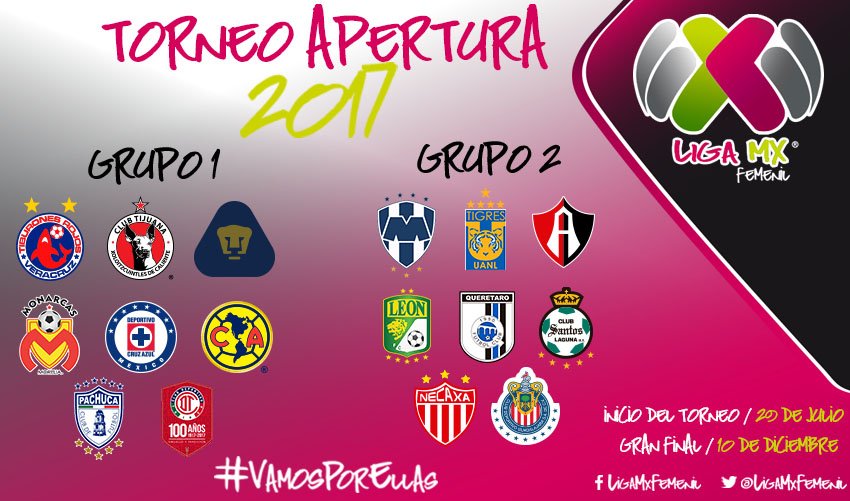 Liga MX Femenil will kick off this July with 16 teams in two groups of eight. All current Liga MX teams will have a women’s team in Liga MX Femenil, with the exception of Puebla, who are working to stabilize their current financial situation, and the newly promoted Lobos BUAP.

END_OF_DOCUMENT_TOKEN_TO_BE_REPLACED

The draw has been held for the Clausura 2017 Copa MX, which has resulted in nine three-team groups being assembled. The Copa MX structure, which was overhauled for the Apertura 2016 edition, underwent some additional changes due to Liga MX dropping out of the 2017 Copa Libertadores.

The teams that had qualified for the Libertadores were shifted over to the Copa MX, resulting in an additional group and some changes to who qualifies for the knockout rounds. Now, the nine group winners and the seven best second-place finishers will advance to the round of sixteen.

END_OF_DOCUMENT_TOKEN_TO_BE_REPLACED

Following the format changes to three-team groups and an actual seeded draw, the groups for the Apertura 2016 Copa MX have been determined.

END_OF_DOCUMENT_TOKEN_TO_BE_REPLACED

The four seeded teams were determined back in December, when the U.S., Brazil, Mexico, and Argentina were announced as the heads of Groups A, B, C, and D, respectively. Now the remaining 12 teams have been drawn into the groups and the dates and locations of the matches have been determined. END_OF_DOCUMENT_TOKEN_TO_BE_REPLACED

The Clausura 2016 edition of the Copa MX features 11 teams from Liga MX and 13 from Ascenso MX, divided into six groups of four. After a six-game group stage, in which each team plays the other three teams in their group home and away, the top team in each group as well as the two best overall second-place teams will advance to the quarterfinals.

The Copa MX features an unusual quirk: in addition to the standard system of awarding three points for a win and one for a draw, the Copa awards a bonus point to the winner – based on aggregate score – of each home-and-away series, called Llaves.

END_OF_DOCUMENT_TOKEN_TO_BE_REPLACED

The Apertura 2015 edition of the Copa MX features 14 teams from Liga MX and 14 from the Liga de Ascenso, divided into seven groups of four. After a six-game group stage, in which each team plays the other teams in their group home and away, the top team in each group as well as the best overall second-place team will advance to the quarterfinals.

The competition kicks off on July 28th, with the knockout rounds set to begin on October 20th. The final will be held on either November 3rd, 4th, or 5th.

CONCACAF has announced the groups and complete match schedule for the 2015 Gold Cup, which is set to run from July 7th to July 26th. The winner of this summer’s Gold Cup will play against the U.S., the winners of the 2013 Gold Cup, for CONCACAF’s berth in the 2017 Confederations Cup.

The 12-team field is not yet completely known, with Honduras and French Guiana set to face off for the final spot in the tournament, but the groups have already been revealed. Update: Honduras defeated French Guiana 4-3 on aggregate to claim the final berth in Group A.

Mexico’s first game will come against Cuba on July 9th in Chicago, IL, followed by Guatemala on July 12th in Phoenix, AZ, and then Trinidad & Tobago on July 15th in Charlotte, NC.

The top two teams in each group will advance to the knockout rounds, as well as the two best third-placed teams. Mexico, the highest-ranked team in its group by far, will be the heavy favorite in Group C. As of the March FIFA rankings, “El Tri” is 21st, Trinidad & Tobago is 63rd, Guatemala is 82nd and Cuba is 110th. The difference between the two highest-ranked teams is 42 places and between the highest and lowest is 89.

For comparison, in Group A, the U.S. is 32nd, Panama is 61st, Haiti is 77th and Honduras, is 81st; the difference between the two highest-ranked teams is 29 places, and from highest to lowest is 49.