The complete schedule, with English and Spanish-language TV listings, for the 2018 World Cup in Russia. The games will also be streamed live at TelemundoDeportes.com and by FuboTV.

The group stage kicks off June 14th and runs through June 28th, with the knockout rounds beginning on June 30th.

The final will be held on July 15th.

END_OF_DOCUMENT_TOKEN_TO_BE_REPLACED 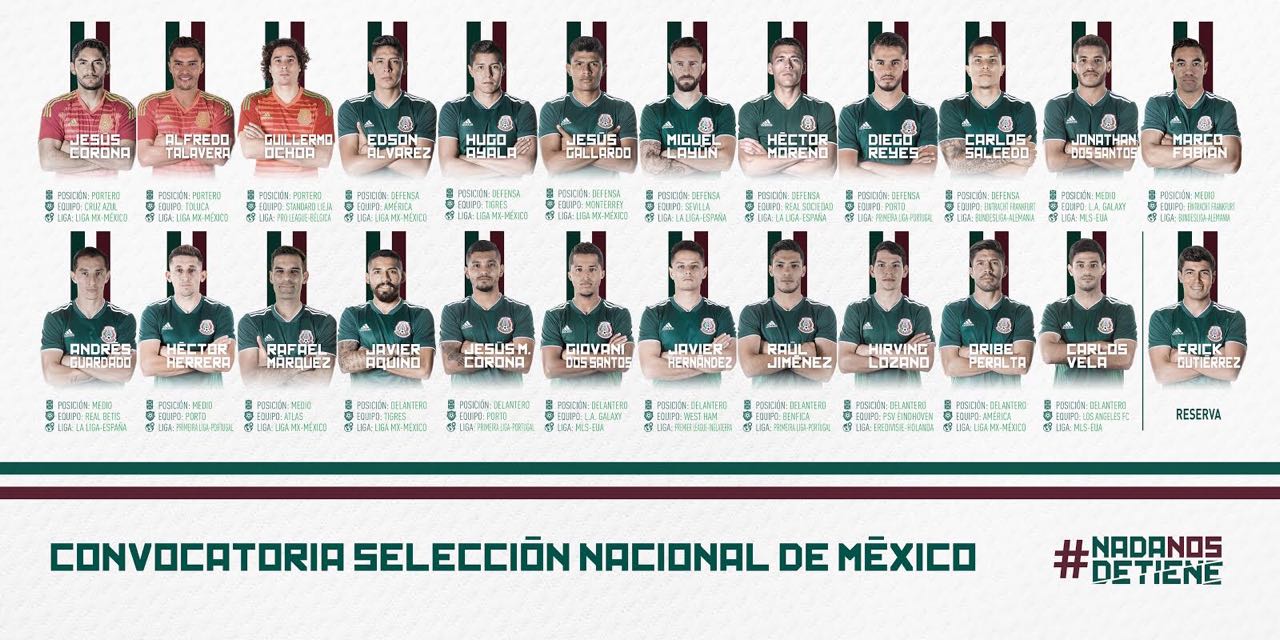 Juan Carlos Osorio has named the 23-man roster for the 2018 World Cup in Russia. There are not many surprises on the squad, with Osorio bringing an experienced team.

Only four of El Tri’s 23 are under age 25 (Carlos Salcedo, Edson Álvarez, Jesús Gallardo, and Hirving Lozano), while on the other end of the scale 39-year-old Rafa Márquez will be the second-oldest player in Russia this summer.

Notably, this is the first time Mexico’s World Cup squad has contained more players plying their trade internationally than domestically; just eight players come from within Liga MX, with the remaining 15 playing in the U.S. and Europe.

END_OF_DOCUMENT_TOKEN_TO_BE_REPLACED

The draw for the 2018 World Cup in Russia was held this Friday, with Mexico being placed into Group F.

Mexico will open their World Cup campaign against the reigning champions Germany on June 17th before facing South Korea on the 23rd and wrapping up group play against Sweden on the 27th.

END_OF_DOCUMENT_TOKEN_TO_BE_REPLACED

After a surprise loss to Jamaica in the semifinals of the 2017 Gold Cup, Mexico will now look ahead to the resumption of World Cup qualifying in September.

El Tri was eliminated in the semifinal round of both of their summer competitions, the Confederations Cup and the Gold Cup, and playing in both tournaments meant Juan Carlos Osorio had to make some difficult roster decisions to balance Mexico’s commitments.

END_OF_DOCUMENT_TOKEN_TO_BE_REPLACED

There have been co-hosts in the past, but this is the first time that three countries have bid to jointly host a FIFA competition. With the World Cup field set to expand, Canada Soccer notes that “Canada-USA-Mexico are uniquely suited to fulfill requirements for the 48-nation 2026 FIFA World Cup finals”.

END_OF_DOCUMENT_TOKEN_TO_BE_REPLACED

Mexico guaranteed their advancement to the Hexagonal round of CONCACAF World Cup qualifying with two matches to spare in Group A play with a 2-0 win over Canada on Tuesday night. The win keeps Mexico perfect in qualifying and also extends their shutout streak to 360 minutes; El Tri has outscored their opponents 10-0 through four games.

Juan Carlos Osorio made five changes from the team that beat Canada 0-3 on Friday, but the end result was the same. El Tri opened the scoring in the 17th minute from the penalty spot after Doneil Henry was called for a foul on Marco Fabián in the box. Andrés Guardado took the PK and sent it past Milan Borjan to make it 1-0.  END_OF_DOCUMENT_TOKEN_TO_BE_REPLACED

Speaking to the media on Monday, Juan Carlos Osorio confirmed there will be changes to Mexico’s starting lineup for tomorrow’s game against Canada. Captain Rafa Márquez will not start after leaving Friday’s game at halftime for precautionary reasons; in addition, Osorio does not plan to put Alfredo Talavera back in goal.

Whether it will be Jesús Corona or Alejandro Palacios getting the nod in net remains to be seen, with Osorio stating they each have an equal chance of starting. If the Pumas man gets the call, it will mark his first cap for El Tri.  END_OF_DOCUMENT_TOKEN_TO_BE_REPLACED

Just days after defeating Canada 0-3 in Vancouver, Mexico will now look to mathematically guarantee their advancement to the Hex when they host the Canadians in the Estadio Azteca. El Tri needs just a point to book their spot in the next round, but they will be looking for more than that here.

Perfect in qualifying to date, with three wins in as many games, Mexico also has a 270-minute shutout streak going. They will look to extend both of those streaks in the Azteca, where losses for the home side are few and far between.  END_OF_DOCUMENT_TOKEN_TO_BE_REPLACED

Mexico extended their lead at the top of the Group A table with a 0-3 win against Canada in front of a record-setting crowd at BC Place on Friday night. The victory keeps El Tri perfect in the fourth round of CONCACAF World Cup Qualifying and after three matches they have yet to so much as concede a single goal.

The loss ends Canada’s own unbeaten start to qualifying, as well as their shutout streak, but they still remain in second after El Salvador and Honduras drew earlier today.  END_OF_DOCUMENT_TOKEN_TO_BE_REPLACED

Mexico is facing off against Canada tonight in World Cup Qualifying, with the two nations vying for first place in Group A. BC Place is sold-out for this highly anticipated match.

In Mexico’s first competitive game of 2016, Juan Carlos Osorio has decided to put out a 4-3-3, with Alfredo Talavera starting in goal.  END_OF_DOCUMENT_TOKEN_TO_BE_REPLACED